Background: Pigment melanin has primarily a photo defensive role in human skin, its unnecessary production and irregular distribution can cause uneven skin tone ultimately results in hyper pigmentation. Melanin biosynthesis is initiated by tyrosine oxidation through tyrosinase, the key enzyme for melanogenesis. Not only in humans, tyrosinase is also widely distributed in plants and liable for browning of vegetables and fruits. Search for the inhibitors of tyrosinase have been an important target to facilitate development of therapies for the prevention of hyperpigmentary disorders and an undesired browning of vegetables and fruits.

Methods: Different natural and synthetic chemical compounds have been tested as potential tyrosinase inhibitors, but the mechanism of inhibition is not known, and the quest for information regarding interaction between tyrosinase and its inhibitors is one of the recent areas of research. Computer based methods hence are useful to overcome such issues. Successful utilization of in silico tools like molecular docking simulations make it possible to interpret the tyrosinase and its inhibitor’s intermolecular interactions and helps in identification and development of new and potent tyrosinase inhibitors.

Results: The present review has pointed out the prominent role of computer aided approaches for the explication of promising tyrosinase inhibitors with a focus on molecular docking approach. Highlighting certain examples of natural compounds whose antityrosinase effects has been evaluated using computational simulations.

Conclusion: The investigation of new and potent inhibitors of tyrosinase using computational chemistry and bioinformatics will ultimately help millions of peoples to get rid of hyperpigmentary disorders as well as browning of fruits and vegetables. 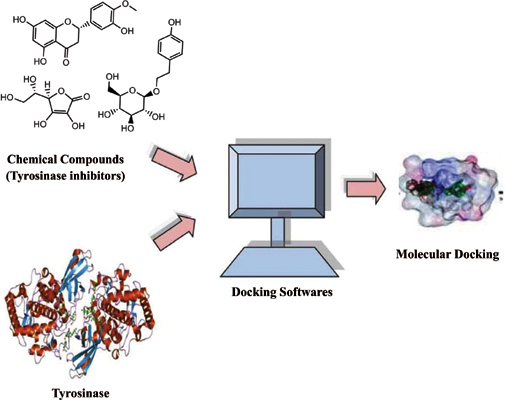