Background: Aminoglycoside 6'-N-acetyltransferase type Ib (AAC(6')-Ib) from Klebsiella pneumoniae is an established drug target and has conferred insensitivity to aminoglycosides. Aminoglycosides are often inactivated by aminoglycoside modifying enzymes encoded by genes present in the chromosome, plasmids, and other genetic elements. The AAC(6′)- Ib is an enzyme of clinical importance found in a wide variety of gram-negative pathogens. The AAC(6′)-Ib enzyme is of interest not only because of its ubiquity but also because of other characteristics e.g., it presents significant microheterogeneity at the N-termini and the aac(6′)-Ib gene is often present in integrons, transposons, plasmids, genomic islands, and other genetic structures. The majority of the reported potent inhibitors against the target are substrate analogs. Therefore, there is a need to develop or discover new scaffolds other than substrate analogs as AAC(6')-Ib inhibitor.

Objective: The objective of this study is to set optimum parameters for the structure-based virtual screening by multiple docking and scoring methods. The multiple scoring of each ligand also incorporates the ‘Induced Fit’ docking effect that helps to build further confidence in the shortlisted compounds. The method eventually is able to predict the potential inhibitors that bind to the active site and can potentially inhibit the activity of the Aminoglycoside 6′-N-acetyltransferase type Ib [AAC(6’)-Ib] from Klebsiella pneumoniae.

Methods: Using the available three-dimensional structure of enzyme AAC(6')-Ib inhibitor complex, a structure-based virtual screening was performed with the hope of prioritizing the promising leads. In order to set up the protocol, 30,000 drug-like molecules were selected from the ChemBridge library. Multiple docking programs, i.e. UCSF DOCK6 and AutoDock Vina have been applied in the current study so that a consensus is developed to the predicted binding modes and thus the docking accuracy. The Amber scores of the Dock6 – a secondary scoring function was also used to perform the ‘Induced Fit’ effect and correspondingly re-rank the compounds. 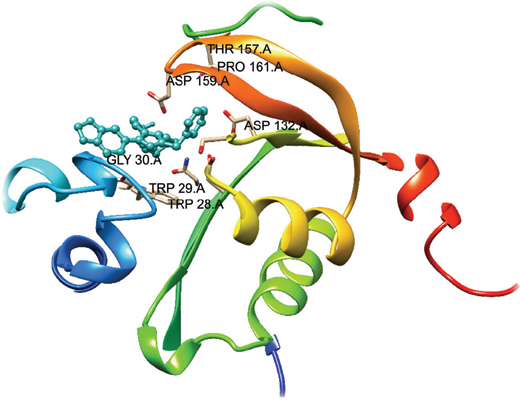