Studies on the IC50 of Metabolically Stable 1-(3,3-diphenylpropyl)- piperidinyl Amides and Ureas as Human CCR5 Receptor Antagonists Based on QSAR


Background: In this study, modulators of human Chemotactic cytokine receptor 5 (CCR5) were described using a quantitative structure-activity relationship model (QSAR). This model was based on the molecule’s chemical structure.

Methods: All 56 compounds of CCR5 receptor antagonists were randomly separated into two sets, 43 were reserved for training and the other 13 for testing. In the course of this study, molecular models were drawn using ChemDraw software. By means of Hyperchem software as well as optimized with both AM1 (semi-empirical self-consistent-field molecular orbital) and MM+ (molecular mechanics plus force field), molecular models were described through numerous descriptors using CODESSA software.

Results: Linear models were obtained by Heuristic Method (HM) software and nonlinear models were obtained using APS software with optimal descriptor combinations used to build linear QSAR models, involving a group of selected descriptors. As a result, values of the above two different sets were shown to result from 0.82 in testing and 0.86 in training in HM while 0.83 in testing and 0.88 in training in Gene Expression Programming (GEP).

Conclusion: From this method, the activity of molecules could be predicted, and the molecular structure could be changed to alter its IC50, avoiding the testing of large numbers of compounds. 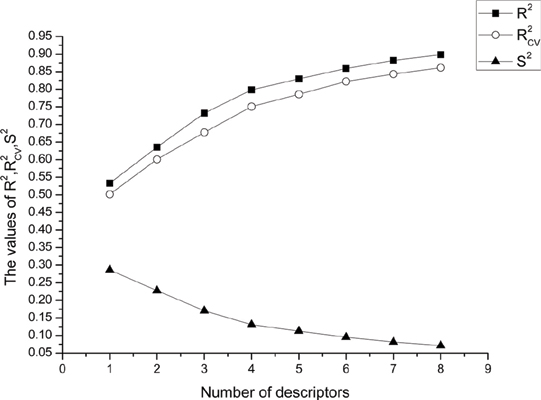