Background and Objective: The development of pharmacologically active molecules for the treatment of hypertension and other cardiovascular diseases are important nowadays. In the present investigation, computational techniques have been implemented on Angiotensin II Type 1 (AT1) antagonists to develop better predictive models.

Results: The significant models developed have been validated by Leave One Out (LOO) and test set methods, which exhibit considerable Q2 values (>0.65 for the training set and >0.5 for the test set) and the R2pred values for the models are also >0.5. The applicability of the contributed descriptors in these models revealed that the chlorine atom, dipole moment, hydrogen bond donor atoms and electrostatic potential are negatively contributing, and the presence of bond between heavy atoms and the carbon atom connected with small side chain and topological polar vdW surface area are favorable for the AT1 antagonistic activity. The MACCS Fingerprints showed that the presence of atoms (kind of heavy atoms), such as N, O, and S, connected with other heteroatoms or carbon or any other atoms, through single or double bonds are predominantly present in highly active molecules. The presence of halogens, long chain alkanes, halogenated alkanes, and sulfur atoms attached with nitrogen through any atoms are responsible for decreased AT1 antagonistic activity.

Conclusion: The results have provided additional information on the structural patterns of the compounds based on its MACCS Fingerprints, which may be used for further characterization and design of novel AT1 inhibitors. 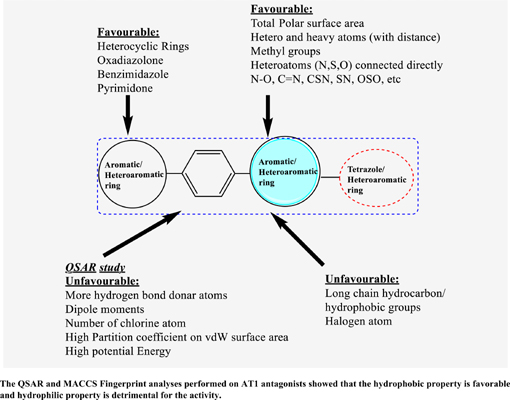