Immunoinformatic Approach for the Identification of Potential Epitopes Against Stenotrophomonas maltophilia: A Global Opportunistic Pathogen


Background: Stenotrophomonas maltophilia is an aerobic, non-fermentative, gram negative, multidrug resistant and opportunistic nosocomial pathogen. It is associated with high morbidity and mortality in severely immunocompromised paediatric patients, including neonates. Immunoinformatic analysis paved a new way to design epitope-based vaccines which resulted in a potential immunogen with advantages such as lower cost, specific immunity, ease of production, devoid of side effects, and less time consumption than conventional vaccines. Till date, there is no development in the vaccines or antibody-based treatments for S. maltophilia-associated infections.

Introduction: Currently, epitope-based peptide vaccines against pathogenic bacteria have grasped more attention. In our present study, we have utilized various immunoinformatic tools to find a prominent epitope that interacts with the maximum number of HLA alleles and also with the maximum population coverage for developing a vaccine against Stenotrophomonas maltophilia.

Methods: This study has incorporated an immunoinformatic based screening approach to explore potential epitope-based vaccine candidates in Stenotrophomonas maltophilia proteome. In this study, 4365 proteins of the Stenotrophomonas maltophilia K279a proteome were screened to identify potential antigens that could be used as a good candidate for the vaccine. Various immunoinformatic tools were used to predict the binding of the promiscuous epitopes with Major Histocompatibility Complex (MHC) class I molecules. Other properties such as allergenicity, physiochemical properties, adhesion properties, antigenicity, population coverage, epitope conservancy and toxicity were analysed for the predicted epitope.

Results: This study helps in finding the prominent epitope in Stenotrophomonas infections. Hence, the main objective in this research was to screen complete Stenotrophomonas maltophilia proteome to recognize putative epitope candidates for vaccine design. Using computational vaccinology and immunoinformatic tools approach, several aspects are obligatory to be fulfilled by an epitope to be considered as a vaccine candidate. Our findings were promising and showed that the predicted epitopes were non-allergenic and fulfilled other parameters required for being a suitable candidate based on certain physio-chemical, antigenic and adhesion properties.

Conclusion: The epitopes LLFVLCWPL and KSGEGKCGA have shown the highest binding score of −103 and −78.1 kcal/mol with HLA-A*0201 and HLA-B*0702 MHC class I allele, respectively. They were also predicted to be immunogenic and non-allergenic. Further various immunological tests, both in vivo and in vitro methods, should be performed for finding the efficiency of the predicted epitope in the development of a targeted vaccine against Stenotrophomonas maltophilia infection. 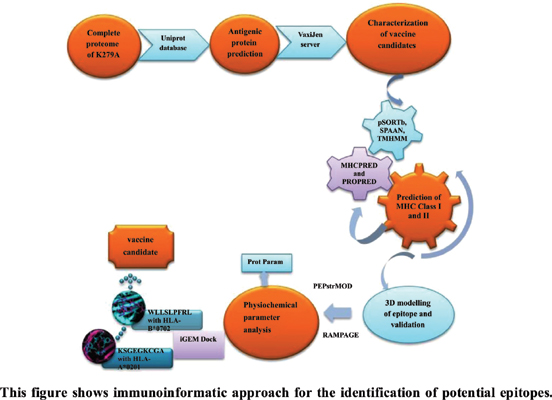